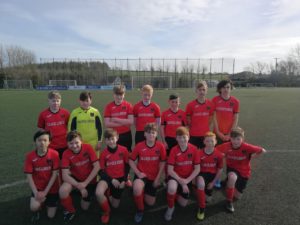 On the 26th of February, St. Peter’s Community School played a last 16 match in the First Year Collins Cup versus Ashton. This fixture was as a result of St. Peter’s finishing top of their group with victories versus Carrignafoy, Cobh and Dungarvan.

The match started well with Liam Quinn testing the opponent’s goalkeeper in the opening minutes. As the match advanced St. Peter’s took control of the match with crisp passing, an organised defence and coordinated attacking moves. The first half finished with Liam Quinn and Scott Moynihan each getting on the scoresheet.

The boys were determined to not give Ashton an opportunity to get back into the match and were focused on getting the third goal. After some good pressure and build up play from Brian Linehan and Caiden Snow in the middle of the park Liam Quinn got through on goal and scored St. Peter’s third and his second of the game. To complete the game Liam Quinn bagged his hat trick and St Peters won out 4-0. A mention must go to Scott Moynihan who has scored 4 goals in 3 games and Liam Quinn who has now scored an impressive 11 goals in 3 games. Next up for St. Peter’s is a home quarter final versus Scariff from Clare.

This error message is only visible to WordPress admins